This page describes various processes of the HPC Certification Forum. Note that not all processes are completely implemented, yet.

Goal: The skill tree representing the competence standard will be developed and evolved as needed by the HPC community. This means that skills may be modified/added and removed to provide the best utility to the community.

Requirements for the development process

Changes to the competence standard are classified to indicate the intrusiveness of the change, a lower category is less intrusive than a higher category. This impacts the decision making process and versioning.

Note that all skill specifications together with the tree that defines their organization defines a HPC Competence Standard. This classification scheme shall be used by contributors in understanding the release and versioning process.

A released skill tree together with all skill specifications has the version number: MAJOR.MINOR. The latest version of the skill tree is available with the tag “latest”.

The version number is increased depending on the most disruptive type of change made:

The skills are version controlled in GitHub.

We aim to not have more than one major release of the competence standard per year: either announced at the Supercomputing conference or the ISC HPC conference.

Change requests are handled depending on the severity of the change:

To prevent stagnation, if more than two topic curators agree on a change on tree level and no other topic curator disagrees, the skill tree curator must accept these changes except if new evidence is presented to not perform the changes.

Changes are accepted until one month before a release by which time the standard is frozen. When the status is frozen, an initial tag is created with a new version number. After that period, only “bugfixes” or serious concerns may lead to a modification Changes considered to be non-ready may be withhold for the next release.

Conditions to make a release

Contribution to the competence standard are welcome.

The standard is available in Markdown format and a wiki is available to render them directly online. The skills are structured in directories according to the hierarchy in the skill tree. The MindMap structures are synchronized with the tree directory to test more invasive changes on the tree level.

Contributions to the skill definitions can be made by

Any suggestion made by a contributor is reviewed by the community and the steering board before it will be included in a release of the standard.

Ultimately, the curators of the respective skill sub-trees will be in charge of assessing the suggestions and modifications and reacting to change requests. At the moment, the process is lightweight, direct change requests are often directly accepted for the phase of building the first release version of the tree.

We enable experts to curate selected skills that are in their field of expertise. As they are proficient in the particular software or hardware, they can assess which knowledge is most relevant to beginners, intermediates or experts. Analogous to a “maintainer” of a code subsystem, these individuals are curating the adopted skills. We say that a skill is “adopted” if it is curated by an expert and the expert becomes the curator of a skill. The curator of a skill will be listed on the skill.

Responsibilities of a curator

The curator should watch for any suggestions to modify the skill and moderate these changes accordingly. The curator should participate in discussions involving the specific skill. Procedure to adopt a skill Initially, the expert should review the skill carefully and make suggestions for any change. The expert should also contribute some examination questions to the portfolio. The responsible subtree curator should be contacted by email or Slack (skill-tree channel) and the interest to adopt the skill must be expressed together with a brief reference about expertise in the field. The board will then accept or deny the request.

By contributing to the standard, contributors agree to transfer their copyright to the HPCCF in accordance to the CC BY licence terms. You shall not contribute anything that was developed by others and you do not have the explicit permissions and Copyright to do so.

The HPCCF competence standard and provided tools are licensed under the CC BY 4.0 Creative Commons Attribution 4.0 license if not stated explicitly otherwise in the tools.

If any artifact (e.g., an excerpt of a competence or tool) is used outside the clear scope of the HPCCF, the license information must be provided:

Firstly, an author is allowed to indicate on the training material itself or a related promotional material which skills are covered either fully or partially using our seal of endorsment.

Secondly, we will link from our webpage the endorsed training material covering the individual skills and certificates. With our tools, we provide various views of the skills with links to suitable training materials that helps to promote compatible training.

The seal of endorsement indicates that a specific training material covers certain skills from the competence standard. 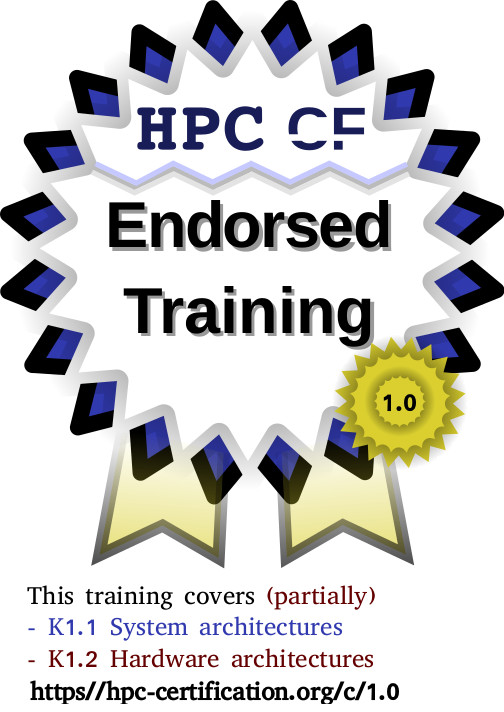 The reference to the HPCCF and the seal can be used free of charge under the condition that the developer of the training material registers a link to the material (or course/event) on our webpage using our online form. To help you to create the appropriate formulation, you can select skills in the interactive skill tree and then navigate to the selection tool.

Note that we are not verifing the correct usage of the seal explicitly. However, in case the training material or course doesn’t deliver the expected material practitioners may complain and we may be forced to remove the link to that training material from our webpage.

A practitioner can perform examinations to obtain certificates.

In order to obtain a certificate, the practitioner must perform an exam. The examination process can be started at any time.

To clarify the behavior and privacy the process is documented as follows:

In either case, the affiliation and raw responses are preserved on the server. The affiliation is used for promotional purposes, while the raw responses will be analysed to optimise the questions. For example, if we identify that most users make the same mistake it may be an indication that either that question or its answer is too ambiguous and should be improved. Also, lecturers will profit from the feedback if particular questions reveal poor performance of practitioners of a particular HPC site.

The examinees that pass the examination are awarded a corresponding certificate. Such certificate consists of two parts: a PDF and a text file. The PDF contains the key information making the certificate meaningful. An example is given in the image. 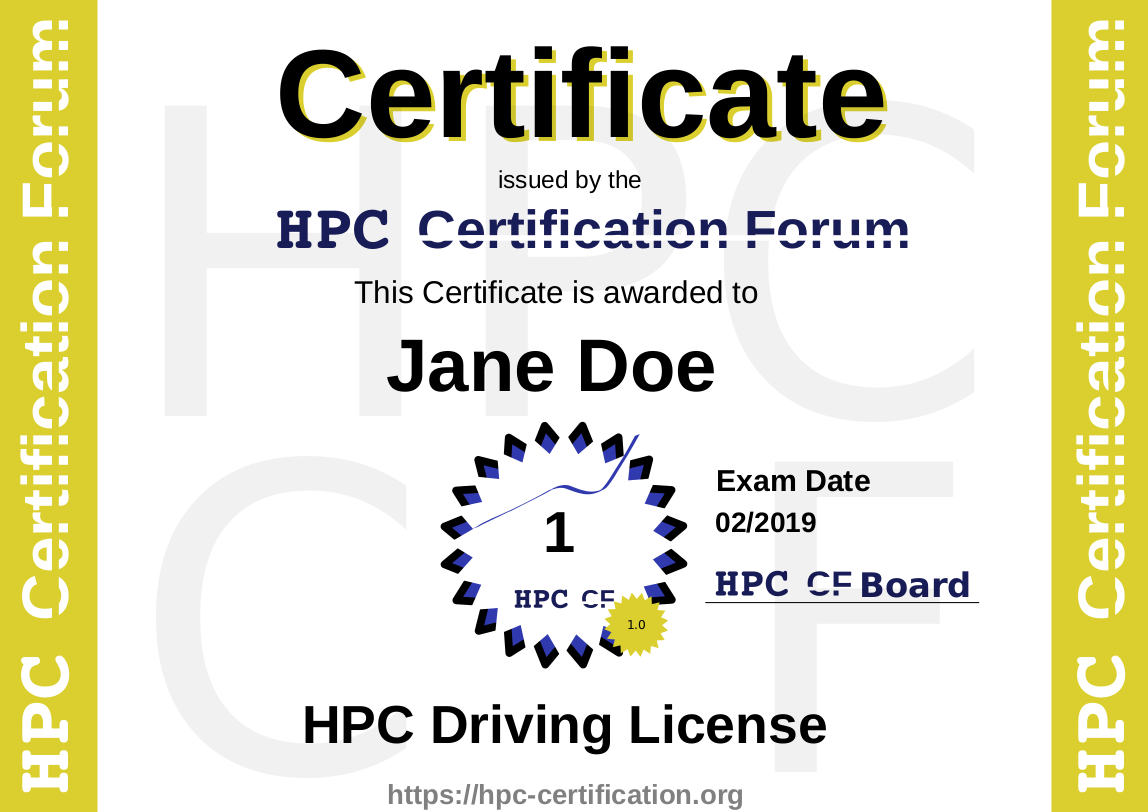 The name and identifier of the certificate is found in the centre, on our example these are “HPC Driving License” and ID 1, respectively. Similar to a driving license, this particular certificate could provide the minimum set of knowledge required to understand and use a typical supercomputer.

The text file contains the same information, as well as a verification URL that can be given to a third-party to confirm the certificate’s credibility. Technically is is PGP signed using the private key of the HPC Certification Forum to allow verification with the public key. An example file looks as follows:

In a nutshell, we as members, contributors, and leaders pledge to make participation in our community a harassment-free experience for everyone, regardless of age, body size, visible or invisible disability, ethnicity, sex characteristics, gender identity and expression, level of experience, education, socio-economic status, nationality, personal appearance, race, religion, or sexual identity and orientation.

We pledge to act and interact in ways that contribute to an open, welcoming, diverse, inclusive, and healthy community.

There are three types of meetings:

Open meetings are held on a monthly basis, anyone that is interested may participate. We are using Slack for the meetings to allow everybody to read the progress of the discussion and to comment upon any action item. The general chair will post calendar invites via the members mailinglist.

Decision making is lightweight at the moment: while we have defined roles for steering board members that include final authority in the event it is needed, thus far we have made decisions democratically without the need to rely on this formal mechanism. Basically, any contribution is either accepted or discussed and modified until it is accepted.

Voting is done publicly on a Slack channel “election” in the HPC Certification forum. Everyone can nominate someone at the channel or self-nominate themself by posting a message with the name of the nominee, the position, and a brief description. The brief description should state why the nominee is qualified/seeks to become responsible for the given position.

At the end of the nomination phase, the general chair will compose a list of candidates for each position. HPCCF members can then vote using thumbs up on the candidate(s) they like. The members are encouraged to vote based on past contributions made by a nominee and the potential they see by appointing the member to chair the respective activity in the initiative.

If a board members resigns/steps down during an election period having less than 6 month in the current period, the current steering board can elect a potential candidate to fulfill the role for the rest of the period. If more than 6 month are remaining, an election for this position is announced.